The Greatest Man I Ever Knew

“He’s the one” … I remember saying that and I don’t know why I feel like I was nostradamis but I called that one …
Mom replied “what do you mean?” and Destiny said “You know mom… The One”

I was in 4th grade at the time getting ready to go into 5th grade and the memories even though they were so long ago were so great!

I remember the grades I brought home on the last report card before he left out to Tennessee from where we were in Mesa Arizona to get settled in with a job and place to live for when we come out in the summer!

“I was wanting to bring you with me so you could meet my nephews and go to school with them for a little while but with those grades I don’t know if you deserve it” … I remember that as if he was sitting here next to me telling me that right now.

That first year we were here in Tennessee was the most memorable. We didn’t have all the money in the world but we did have the most important thing… Eachother! The funny things… We were struggling week to week and I remember him always telling us that if he were to ever win the lottery that he wouldn’t tell anyone and would just continue to live day to day without making any major changes… So one day after playing with the neighbor kids (I was in 6th grade) I walked over to the house as mom was carrying in groceries … the entire van was full … Both back seats the front seat and the area in the back behind the seats. It was full to the top! Literally we had more groceries than we have ever had! That’s it we won the Lottery! I swore we did! Later that night when my sister got back from her friends house we walked down to the school to walk the track as we did here and there to get out. “We won the Lottery!” I told my sister and she laughed almost telling me to shut up but after I explained everything and we got home… She looked into the cabinets and the fridge.. She knew what I was saying.. But, we just got food stamps and that was enough for one of the funniest stories of that year!

1. This is the memory I share with a couple people and this is when we “the boys” would go out with him on his route. We would work the stores and do everything we could to help him and sometimes on Saturdays we would bust out 3 hours worth of work in 1 hour just to make it back to the house for Kick Off of the Nebraska Game!

2. Nebraska Football- Need I say more? We all lived for it! But, He was 100% Pure Cornhusker!  Every day when he woke up, after he got off and then again before he went to bed he would spend hours on Huskerpedia.com reading and researching everything that was taking place with Nebraska Football. That is what we have and what we lived for! … ps party at the house on opening game this season!!! :P (oh, don’t tell mom I don’t want her to know I told the entire internet about it)

3. Liberty Weekend – After 4 months in Chicago for processing and bootcamp I finished “Pass and Review” … after we dismissed I looked across the room and after looking at everyone else’s parents hoping they were mine I seen Mom and Dad.  The Hug and Tears in his eyes he finished with ” I am so proud of you” This made for the first time I had ever seen him cry and it was the greatest memory I hold!!

4. You Will Succeed – After years of trying one thing after another to become a successful entrepreneur we had talked about one of the things I was currently doing which was “Network Marketing”.  We had just left Mamaw and Papaw’s house and he pulled off the side of the road and pulled his sun glasses off of his face.  He looked at me with tears in his eyes and told me (and I remember as if it was yesterday)”I need you to listen to me, I know I give you a lot of grief about your business stuff but I want you to know its only cause I love you.  The main this is you are just about as stubborn as me and I know one day your going to get focused and stay on one thing and you will succeed.  I don’t believe it will be this phone thing but you will do it and when you do you can look at me and everyone else and say I told you so”

I don’t know much to say but I love you.  Well I guess, Go Big Red is just as good… Happy Game Day!

You have done so much for me and I owe you everything I have.  I wouldn’t be me if it wasn’t for you.  You opened my eyes to so much.  You taught me a solid work ethic and lead by example.  You taught me so many lessons in life and there is one standing out … Treat a woman as if she is a Royal Queen and you cant go wrong.  Once again you lead by example. You showed my Mom true love and I want to Thank You for that. As for me, my brother Mikey and my two sisters Sydney and Destiny We Owe You Everything!  Nose Poker, Jokes, Nebraska Football, Nintendo Wii Tournaments, Mortal Kombat and those early days at The Vine playing that Arcade Game by the door.  We will never forget you! I love you and one last time… Go Big Red!!!! 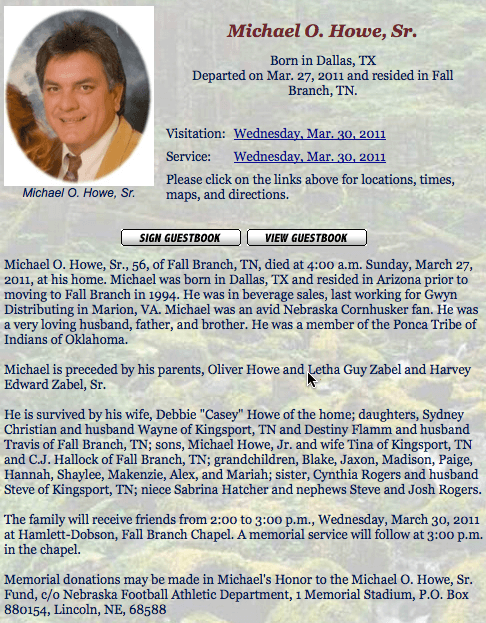 I have to say Thank You to every one! Everything you all have done and said means so much and I cant say that enough.

Our Family is forever Grateful for ALL of You!!!

After the last few days I have to say We Have The Best Family And Friends EVER!

I can wrap up my passions in life with three words. Motivation, Marketing, & Music. In one way or another, I fit at least two of the three M's in every day! I am a freelance marketer, published author, artist & musician. Want to know more? Just ask...
All Posts »
PrevPreviousThat’s What We Do
NextJust Some Random Thoughts 4-19Next
Menu